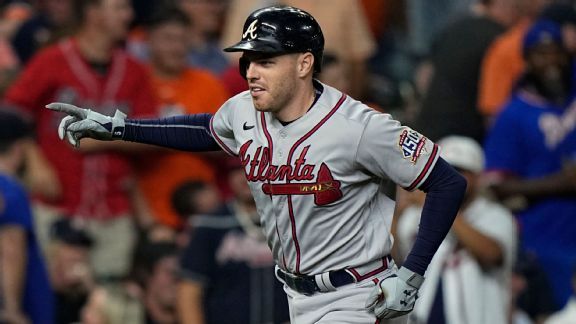 Freeman, 32, entered free agency for the first time in his career after helping the Atlanta Braves win their first World Series since 1995 with a six-game win over the Houston Astros.

During his 12th major league season, he hit .300 (eighth in the National League), with 31 home runs, 83 RBIs, and an NL-leading 120 runs scored. Freeman’s arrival in free agency was a surprise for a player long touted as the face of the Atlanta franchise.

The Braves named him as such, giving him an eight-year, $135 million contract extension in 2014 to serve as the franchise’s pivotal player through a rebuild. Atlanta lost 90 games or more for three straight seasons before re-emerging as a contender in 2018.

Led by Freeman, the Braves have since won four straight NL East titles, culminating in last season’s championship. After the World Series, Freeman’s contract expired and the Braves extended him a qualifying offer.
($18.4 million).

Unsurprisingly, Freeman turned down that offer and became a free agent. Freeman entered free agency with one of the most brilliant resumes in the game. He is a .295 career hitter with 271 home runs and 1,704 hits.

Hits and home runs rank among the top 10 career marks in Braves history.

Only Chipper Jones and Dale Murphy have had more hits for the Braves since the franchise moved to Atlanta in 1966. Freeman made five NL All-Star teams, won a Gold Glove in 2018, won a Silver Slugger at first base for the National League in each of the past three seasons and finished in the top 10 in NL MVP voting six times.

In 2020, Freeman was named the NL MVP after hitting a career-best .341 during the pandemic-shortened campaign.

The Braves selected Freeman in the second round of the 2007 draft. He was born and raised in Southern California, though because his parents were born in Canada, he has dual citizenship.