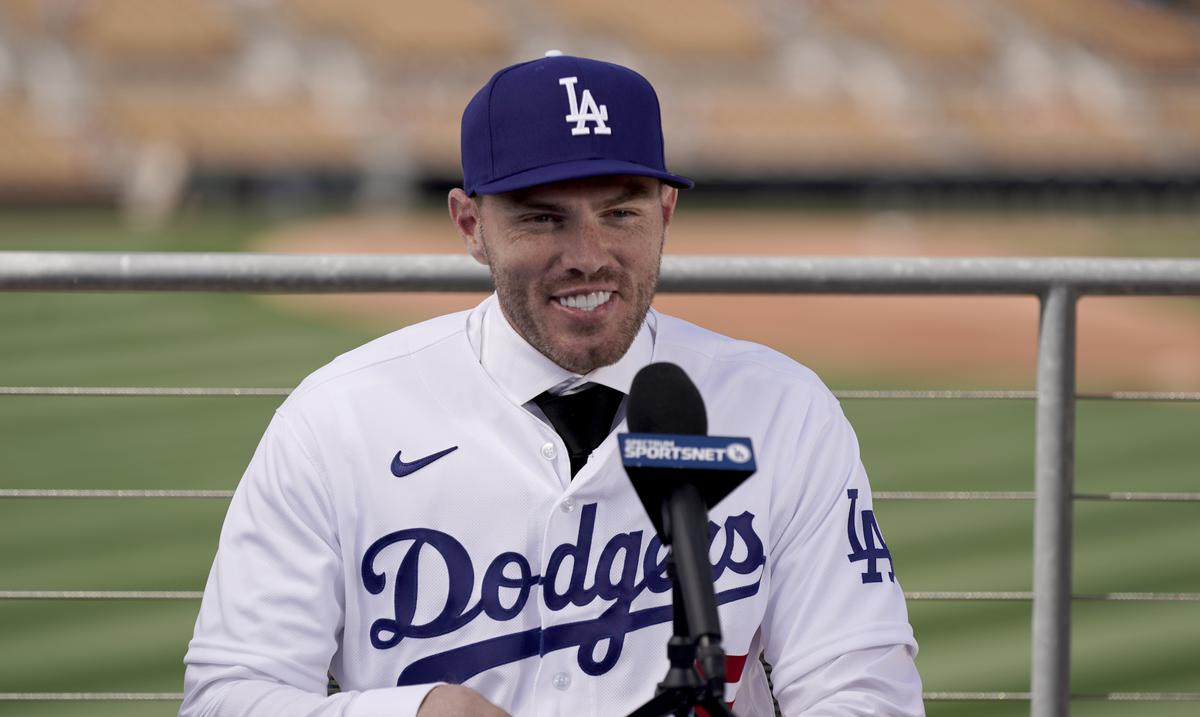 glendale — Freddie Freeman admits he is still bewildered and hurt by the way his 15 years with the Atlanta Braves ended.

The star slugger is also delighted that the messy breakup has allowed him to begin the next chapter of his impressive career close to home with the Los Angeles Dodgers.

Freeman joined the Dodgers on Friday for his first workout since agreeing to a six-year, $162 million contract to be a centerpiece of the Los Angeles roster.

“Everyone just welcomed me with open arms,” Freeman said from the balcony of the Dodgers’ spring training complex after hundreds of fans cheered him on as he donned the team’s jersey for the first time.

“You know how much I care about winning and my family,” Freeman added. “If I was going to leave a place that I was in for 15 years, coming home and being in this organization is probably the best thing that could have happened.”

“Did I ever think I would not be an Atlanta Brave? No, I did not think that… When you get to free agency, all bets are off. You really don’t know what’s going to happen.”

Freddie Freeman discusses his emotional offseason and the decision to sign with the @Dodgers. pic.twitter.com/Wn2lYKrPLC

Freeman arrived at the Dodgers’ Camelback Ranch training complex in a suit and tie, but immediately received some friendly banter from his new teammates. Freeman is a Southern California native who probably should have known better, but he’s eager to fit in with his household.

“I guess it’s not really a suit organization,” Freeman said with a smile.

The 32-year-old slugger changed quickly for the first display of his famously consistent swing in the batting cages.

The Dodgers paid big bucks to get Freeman after his impressive career with the Braves, including a 12-year run with the major league club that culminated in the 2020 NL MVP award and the 2021 World Series title.

But the big contract with the Dodgers hasn’t eased all of Freeman’s pain. He was the face of the Braves, but the slugger feels like they turned their backs on him.

Freeman was also unconvinced by Alex Anthopoulos’ tears when the Braves’ general manager spoke about his departure: “I saw it. That is all I will say,” he said.

Although Freeman received only two phone calls from Atlanta’s front office during the offseason, he still thought he would return to the only team he had ever played for. He kept the faith even when he received a contract offer at last season’s trade deadline, countered it and never received another offer.

His optimism was dashed Monday when the Bravoes made a surprise trade with Oakland for Matt Olson, who picked up a $168 million contract a day later.

Freeman was working out at his home in Orange County when he learned of the Olson trade, which “shocked” him.

“I had no idea that was going to happen, nothing like that”Freeman said. “When they told me, emotions were all over the place. I couldn’t really talk for a couple of hours, trying to figure out what was going on.”

Once he got himself together, Freeman and his agent considered offers from various teams. The Dodgers easily made more sense.

“I talked to my wife and said, ‘I think it’s time to come home,’” Freeman said. “I have my 67-year-old dad and my 86-year-old grandfather who can now watch me play every day, just like they did 15 years ago in high school, that’s what’s special for me, wearing a uniform from a team that cares about win and strive to win every year, that’s all you can ask for.

Freeman hit .300 with 31 home runs and 83 RBIs while playing in 161 regular-season games last year. He then hit .304 with five home runs and 11 RBI in the postseason as he guided the Braves to their first title since 1995 with a six-game win over the Dodgers in the NL Championship Series.

Freeman never really thought he would leave Atlanta, but the Dodgers have been watching him for a long time, Friedman acknowledged.

“For the past few years, every time he got to first base, Justin Turner would chat with him about how great he would look in a Dodgers uniform,” Friedman said with a laugh. “I think there could definitely be some tampering charges against Justin Turner.”