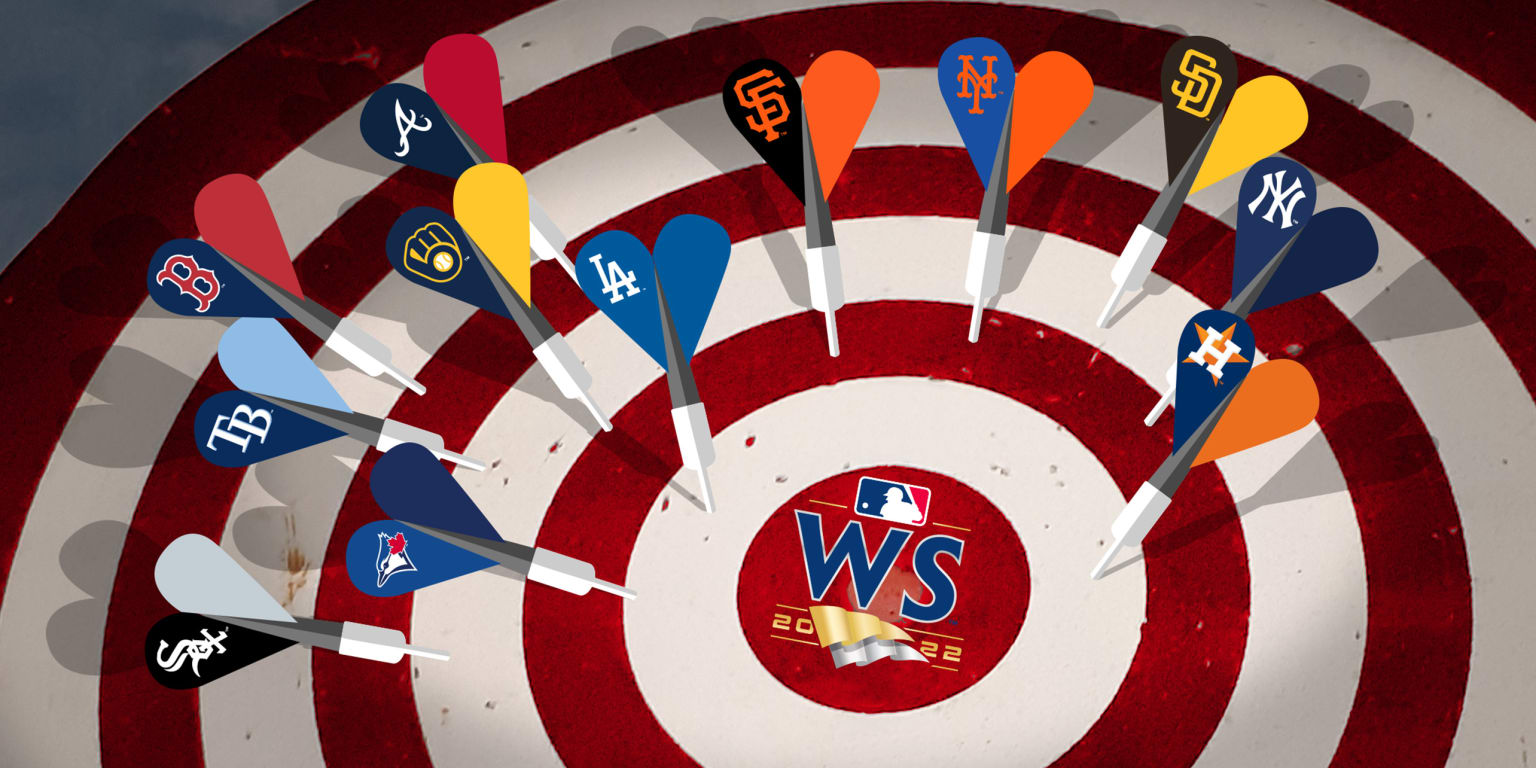 Every season has its share of surprises that no one saw coming. In 2021, for example, a Braves who won 88 games in the regular round and lost their best player in July defeated a Dodgers in the NLCS who won 106 games and then beat the Astros in the World Series.

With more teams in the postseason this year, things could be even more unpredictable, but we still ask our tipsters to do their best. A panel of 73 MLB.com experts voted to choose the winner of each division and also the Wild Cards in the National League and the American League, as well as the two champions of each circuit and the winner of the World Series. These are the results.

The AL East made history in 2021, becoming the first division since the Wild Card was born (1995) and the second in the divisional era (since 1969) to have four teams with 90 or more wins. Despite finishing with a 91-71 record, the Blue Jays missed the postseason. The division is strong once again, but most MLB.com voters think Toronto is ready to move up.

Led by Vladimir Guerrero Jr., Bo Bichette, George Springer, Teoscar Hernandez and newly acquired third baseman Matt Chapman, Toronto should have one of the best offenses, even after losing Marcus Semien in free agency. The Blue Jays also saw AL Cy Young winner Robbie Ray and left-hander Steven Matz go that way, but signed Kevin Gausman and Yusei Kikuchi to replace them and will have José Berríos and Alex Manoah for a full season.

No team won its division by more margin last season than the White Sox, who finished 13 games ahead of the Guardians. With the Twins adding Puerto Rican Carlos Correa and Sonny Gray; Puerto Rican Javier Báez, Venezuelan Eduardo Rodríguez and Spencer Torkelson (first pick in the 2020 draft) joining the Tigers; and Bobby Witt Jr. (MLB’s No. 1 prospect) set to make his Royals debut, the AL Central could be more competitive in 2022. Our panelists still see Chicago as the favorite, though.

It’s not hard to see why the White Sox received so much support in our poll. They have an excellent core, they added veterans like AJ Pollock, Josh Harrison and Kendall Graveman; and they could get a lot more from Cuba’s Luis Robert, Eloy Jimenez, Michael Kopech and Andrew Vaughn in 2022.

Despite losing Gerrit Cole, George Springer, Charlie Morton and others to free agency in recent years, the Astros have continued to compete year after year, and our voters don’t think Correa’s departure will stop them from doing so.

Houston reached the World Series last season for the third time in five years, and while the star shortstop is gone, the club still has enough talent to make noise again in 2022, especially if Justin Verlander pitches effectively after missing all last season while recovering from Tommy John surgery.

Will East LA have another great year in store for us? Our voters see it that way, picking four 9ths from the division to advance to the postseason.

After reaching the World Series in 2020, the Rays set a franchise record by winning 100 games in 2021, enough to win the division, and phenom Wander Franco has the team in position to fight for another October berth. . After making his debut in June of last year at age 20, the former MLB No. 1 prospect went on a historic 43-game on-base streak and finished his rookie season with a 129 OPS+, then signed a contract extension of 11 years and $182 million, the most expensive deal in the organization’s history.

Boston rebounded from finishing in the basement in 2020 and landed a Wild Card spot last year, falling just short of reaching the World Series. The Red Sox beat the Yankees in the Wild Card Game at Fenway Park before defeating Tampa Bay in the ALDS and taking on Houston in a tight ALCS. Boston now has Trevor Story at second base after signing the former Rockies shortstop to a six-year, $140 million deal.

The Yankees got Josh Donaldson in a trade, but they were pretty quiet on the free-agent market. Instead, they’re banking on bounces from the likes of DJ LeMahieu, Gleyber Torres and Joey Gallo and hoping Luis Severino and Aaron Hicks come back strong from injuries.

It’s been nearly three decades since the Blue Jays last reached the World Series, winning back-to-back titles in 1992 and 1993. Toronto came close in 2015 and 2016, advancing to the ALCS before falling to Kansas City Cleveland, respectively. Our panel thinks this year will end that drought, with most voters predicting that Vlad Jr, Bo and Company will contest the World Series.

It would have been easy for the Braves to throw in the towel when Venezuelan star Ronald Acuña Jr. tore his ACL in his knee last July, but the team did just the opposite. They were strengthened by acquiring Cuban Jorge Soler, Adam Duvall, Puerto Rican Eddie Rosario and Joc Pederson via trades and ended the year raising the first World Series for the club since 1995. Several of their pieces are back, with one big exception: Freddie Freeman.

That absence will take some time to overcome, but the Braves already have a capable replacement in Matt Olson, who was acquired from the A’s and later signed an eight-year, $168 million extension. Acuña hopes to return in May, giving the team the edge in a very competitive division.

Milwaukee qualified for the postseason for the fourth consecutive season in 2021, taking the Central Division thanks in part to an impressive trio of starters, led by Cy Young winner Corbin Burnes, Brandon Woodruff and Freddy Peralta, backed by closer Josh Hader.

It’s not easy to lose the amount of talent that left Los Angeles – Max Scherzer, Corey Seager and Kenley Jansen – and get away with it. But if any team is capable of doing it, it’s the Dodgers. Trea Turner, acquired at last year’s trade deadline, will move to shortstop to fill Seager’s void. The club re-signed Chris Taylor and Clayton Kershaw before agreeing to a six-year, $162 million deal with Freeman.

The Giants had to win 107 games to end an eight-year stretch by the Dodgers winning the division, but our pundits are leaning toward Los Angeles in 2022.

Although there is an additional Wild Card this year, the pool of teams fighting for those three spots will be large. The Cardinals remain a competitive team, while the Phillies, Marlins, Nationals and Cubs have improved, but MLB.com leans toward the Giants, Mets and Padres.

After matching a franchise record with 107 wins last year, the Giants had their work cut out after Buster Posey announced his retirement and Kris Bryant entered free agency, along with four-fifths of the club’s rotation. San Francisco re-signed Brandon Belt, Anthony DeSclafani and Alex Wood. In addition, they signed Carlos Rodón, Alex Cobb, Matthew Boyd and Joc Pederson. Joey Bart (31st-best prospect in baseball) will catch.

The Mets’ options were affected by the injury of Jacob deGrom, who will go four weeks without shooting. But the club’s offseason moves mean they are better positioned than they were last year to navigate through their ace’s absence. New York added Max Scherzer and Chris Bassitt to the rotation and supplemented their offense with the acquisitions of Starling Marte, Eduardo Escobar and Mark Canha.

On behalf of the Padres, Dominican shortstop Fernando Tatis Jr. will miss several months due to a fracture in his left wrist. But San Diego has plenty of talent, especially pitching, following the acquisitions of Sean Manaea and Nick Martinez, the rise of prospect MacKenzie Gore and the return of Mike Clevinger to join yu Darvish, Joe Musgrove, Blake Snell and Chris Paddack.

Seeing the Dodgers in the World Series has become a habit. Los Angeles has been the representative of the National League in three of the last five years.

This team has stars everywhere, including four MVP winners – Freeman, Kershaw, Mookie Betts and Cody Bellinger. Furthermore, the club is hungry for another championship after coming up short a year ago. Our experts see the Dodgers beating the Blue Jays in the Fall Classic and hoisting the trophy for the second time in three years.