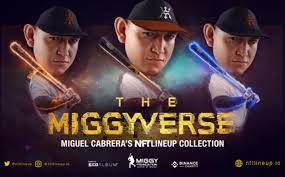 The Venezuelan player of the Detroit Tigers, Miguel Cabrera, stays updated and will now be part of the new world of NFTs.

Through his Twitter account, the Venezuelan star Miguel Cabrera announced his participation in the NFT Lineup project, where he asks for the support of all his fans and followers.

In commemoration of his record of 500 home runs by the Venezuelan, reached last season, he embarks on another project of great dimension, which will bring benefits to the foundation of the famous MLB player.

The firm NFT-LINEUP, will make the first collection of what they called “The Miggyverse”, which will be a collection that will progressively produce its digital assets and expand its community with multiple releases of other records conquered by the living legend in each turn it takes.

Each collectible is depicted in eye-catching surreal animated illustrations that will appeal to collectors and sports fans alike.

The 500HR MIGGYVERSE is currently in the pre-launch stage with a waiting list, open to the first 500 interested collectors who subscribe, who will be able to participate in the WHITELIST event for an exclusive pre-sale price.

A percentage of the income from sales of the collection will be assigned to “MIGGY FOUNDATION” as donations to promote different programs such as “MIGGY BALL”, this program brings fun and hope to more than 2500 children in various cities of his native country, as well as in South Florida and Detroit in the United States.

Friends! I present to you one of my new challenges: @NFTLineupa project of which I’m proud to be a part of.

Be ready cause soon we’ll be launching my very own #NFT which comes full of surprises.

Don’t get left behind! Miguel Cabrera is part of NFT digital assets