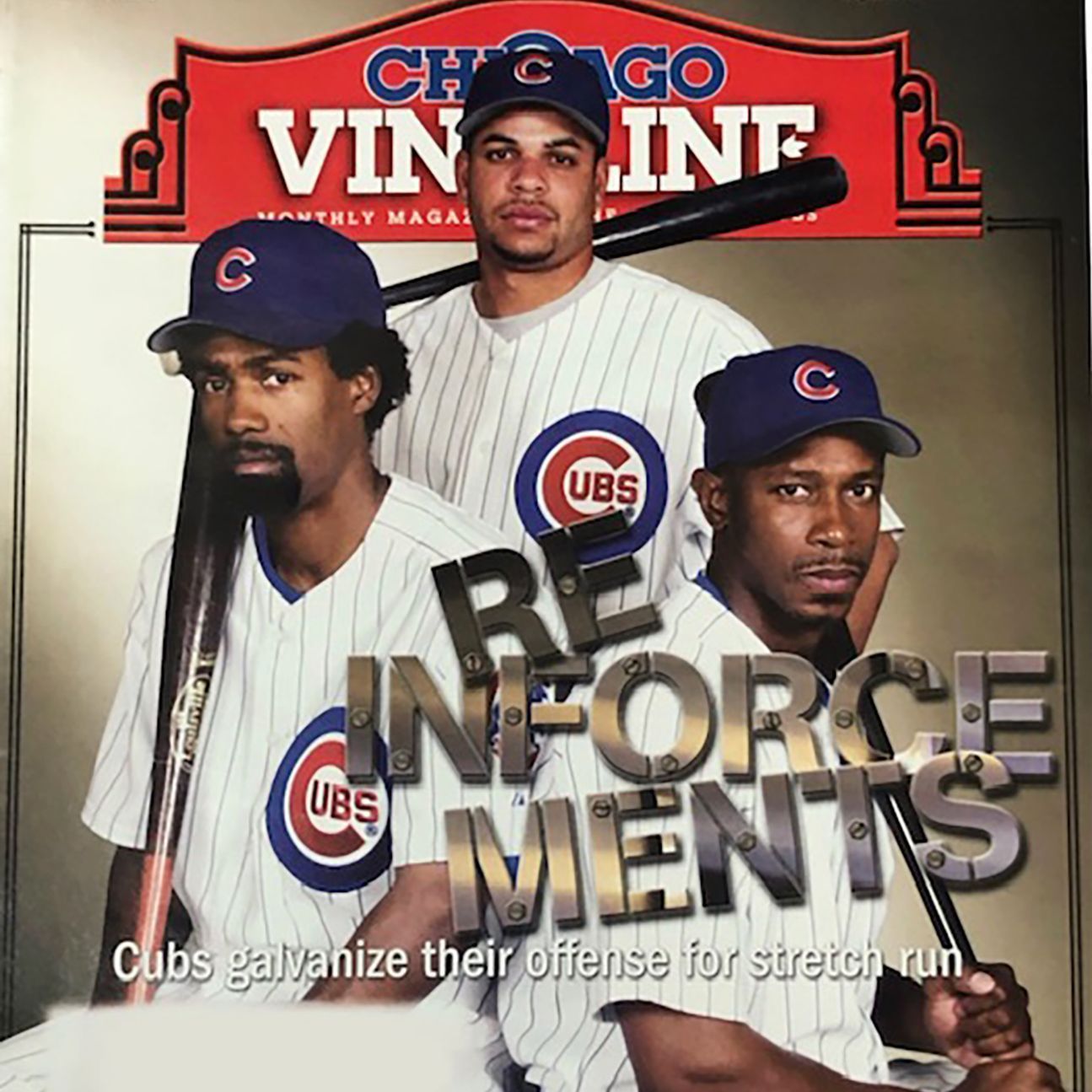 He had played at Wrigley Field many times, primarily as a player raised on the Chicago Cubs estates, but also as a member of the Philadelphia Phillies. In 2003, however, I returned to Chicago through a trade, negotiated on July 30 by the Texas Rangers for cash and a minor league catcher, just before the MLB trade deadline.

And he wasn’t exactly excited about it.

When they told me they changed me, it was over the phone. When I went to say goodbye to the dressing room in Texas the next day, the things in my locker were already packed. I was gone before I left. That was difficult. I would miss the humor of manager Buck Showalter. I would miss my teammates like Michael Young, Juan González and Alex Rodríguez. I would miss our crazy team meetings. I would miss my fan club program, the Good Grades Club, where students sent me their report cards to get an autographed photo or other rewards – a brilliant idea from the Rangers marketing team. Now the emails would stop.

Worst of all, I was 32 years old, recovering from a hamstring tear, and after limping in minor league rehab for a month, I finally managed to regain my playing form. No one could put me out of the AL in July – I posted a .925 OPS that month, and despite a lousy season for Texas (we were in last place when I was traded), I was building my way back to being a viable candidate. to free agent and starter again. He didn’t want that race to end on someone else’s terms. But that’s how it happened.

This week, many players will have these kinds of feelings and more. Lost, revitalized, the new kid, the veteran vet, kicked out of a job, last to first, starter to bench, all in one simple transaction, with no guarantees of how the story will end.

One of the first things I did after coming back to Chicago was a photoshoot with other players traded in the Cubs. Kenny Lofton and Aramis Ramirez joined me for the cover of the Cubs’ monthly Vine Line magazine. That picture is worth a thousand words, my feelings of disappointment in full color. I hadn’t cut my hair since the year before, and I kept thinking about how they changed me from where I played every day to where I would be a committee player at best. Sure, the postseason is the goal, especially after a career, at the time, off seasons without champagne, but I also needed to have a job to even think about October. Getting 50 at-bats in two months might not be enough to make a roster.

At least they they seemed happy to having me. On my first day as a new Cub, manager Dusty Baker greeted me and expressed his enthusiasm for my joining the team. The man fit the legend, physically imposing, but he looked into your eyes with a certain warmth and understanding. I immediately learned about the chewing sticks and green tea close by in the dugout, the healthy drink I relied on while recovering from prostate cancer. He didn’t promise me a starting role, but he knew what I could do; after all, he had played against his Giants many times.

I had only heard, secondhand, that Baker was an incredible player coach, but I had an emotional iron wall around me and it was hard for me to take in. He didn’t know about my long journey in the Cubs minor leagues to get to Chicago. My war with my Triple-A manager, my observation of outfielders circling me to get to the big leagues, or how I lost my father on the last day of the 2002 season. Even though I was long gone from Chicago when this trade was negotiated, it had the baggage of having been negotiated before. That hard lesson about not being in control of my future, the feeling of being property even if the other party thought I was getting a gift.

I found out that Lofton was our center fielder and he was playing some lefties and coming in to pinch-hit or pinch-runner, maybe play a little late-game defense. After being a starting center fielder for years, it was an ego test, and since I never felt like I had a chance to be in Chicago, it felt worse. First, the Cubs didn’t bet on me being a starting center fielder and traded me, then when I became one elsewhere, they traded to get me back only to put me back on the bench. It was like a cruel joke. But then I looked around the clubhouse and saw a lot of players in the same boat. Tony Womack, Eric Karros, Mark Grudzielanek, Tom Goodwin. We had all been headlines, and Baker had his hands full convincing us all that we shouldn’t start now. To his credit, Baker was a magician with people.

You also had to make moves in real life. I had to close an apartment in Texas in the middle of a lease. I had to send my car to Chicago, packed with all the things I couldn’t bring in my suitcase, then fly to Dallas to meet the shipping company on a day off when the Cubs were playing the Astros in Houston. I couldn’t imagine what that would have been like if I had had a family at the time.

Rejoining Chicago was also like coming home after graduating from college. Much had changed. He didn’t know many of the players; the staff was different. It was a new culture: I grew up in 1996 with the Cubs with Jim Riggleman as manager, someone I respected and got along with. Positive, fair, principled. We weren’t very successful during that year and a half, but he took the time to always tell me where he was, stepping aside to tell me, “One day, you’ll be a starting center fielder, somewhere.” Baker brought a tall vocal style, brimming with confidence, a master of psychological warfare. During those two periods, I played in the same direction, but it was far from the same place.

I finally found my advantage working with all the veteran Cubs players in a race for the pennant. Even though the Cubs were at .500 when I arrived, we weren’t far behind – two weeks later, we were in first place. It was my first true understanding that a big part of a coach’s job is filtering out the negativity that can come from a lot of players who think they should have a different role. I was surprised to find myself as one of those guys.

It became essential to see how Dusty ran his ship. Baker was truly the “Godfather of Baseball” and he spoke frankly to you. Months later, I managed to hit the game-winning hit in Game 3 of the SCLN and would publicly remind people that I could hit right-handers by hitting right, and I was a pinch-hitter against a right-hander in that game. Dusty took me into his office after listening to the post-game interview and insisted, “I he that you can hit the rights. “I got the message, but he told me the truth and gave me space to tell my own. I appreciate it.

The days and weeks after my exchange had been a crash course in adaptation, something that can be more difficult for a veteran on their way. I had to put aside the guarantees that put me in the lineup every day and assured me that I would have a job next year and enter the realm of the unknown. Not knowing when he would enter the game or if we would make the playoffs. I saw the worst case scenario: not making the playoffs and then not getting a job in free agency. It was worth it?

In my case, it was, because I’d get the only playoff experience of my MLB career. Looking back, despite how it probably hurt to be seen as the starter, I got something that turned out to be worth my change in status. A division title and a sample from a championship series.

This week, many players are facing change. Even the biggest names, be it a trio of champions in Kris bryant, Javy baez, Y Anthony Rizzo, all now ex-Cubs, unsigned and in little-known territory as they fight for a postseason ticket, or Max scherzer Y Trea turner, in better land as possible rentals for three months. As good as they are, they are still one injury away from upsetting their contract chances in the offseason. They settled in their respective cities and fan bases. Families, kids, school enrollment in September, stability lost – these are no small things, even for players at the top of the baseball food chain.

Then imagine the young prospects or day laborers competing for playing time, sent back by these household names. Little power, few options except to seize the opportunity and build a new home elsewhere. But you can build a new house and you can win championships.

As I learned, sometimes you have to take a risk. For last week’s traded players, that starts now.