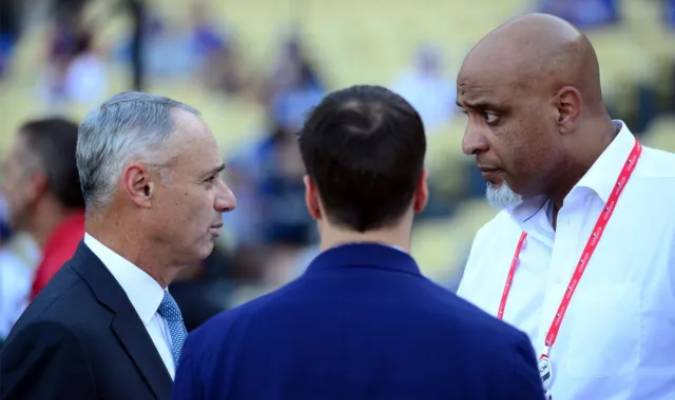 This Thursday, February 10, the commissioner of Major League Baseball announced the agreement of the 30 owners of the teams of Big leagues regarding the implementation of the universal designated hitter (National League and American League) and the elimination of player draft compensation that had been in place since 1976.

Also read: This is how the lockouts and strikes in MLB ended

This is an important advance when it comes to reaching an agreement between both parties. First, because the officialization of the universal designated hitter allows more job opportunities for those players who are either released or do not find space on the club roster.

The universal designated hitter makes the pitchers of the National League they no longer consume at-bats. As of this campaign, that will no longer be seen in baseball. A necessary step, but not the definitive one so that the agreement is reached between the labor party and the worker.

The Professional Baseball Players Association from Big leagues he has demanded improvement on things like years of service on prospects, officiating, and even expanding the postseason schedule.

The MLBPA I was hoping to get the green light on the universal designated hitter, and they already have that. Now, breaking down points such as the subject of the minimum salary cap for players with service from 0 to 5 years. The union offered to lower its figure for a fund to dole out pre-arbitration bonuses to players from $105 million to $100 million. MLB had offered to create a $10 million fund – one that would have rewarded the most productive players among that group of players ineligible for arbitration – financed by the league, using the framework initially presented by the league. MLBPA. That has not been clarified yet.

What’s more, MLB had put forward the proposal for a pre-arbitration player bonus fund in an effort to create a bridge to a new deal.

MLB.com reported days ago that the advance in the salary limit is not a reality either. In fact Major League Baseball offered (as last reported) $615,000 for players with 0-1 years of service time and what the MLBPA It is a figure around 775,000. Postures are still far apart.

So in short, they still have to reach an agreement on the salary limit, on the expansion of the postseason, and above all, everything related to arbitration issues.

The Association intends to have a system that awards non-arbitration eligible players a full year of service based on how they finish in individual award voting and their position in the WAR leaderboards for their respective positions in that echelon.

Rob Manfredcommissioner of MLBreported this Thursday, February 10, that on Saturday the 12th there will be a meeting with the union where the league “will make an attractive proposal” in order to unlock the negotiations and reach an agreement that will allow the lockout to be lifted and the season to begin. Big leagues on March 31.

Now the only thing missing is the final agreement on each point raised and that there is an agreement to sign the new labor agreement and the action is resumed in the big top.

Discord and encounters in the conflict between MLB and the Association