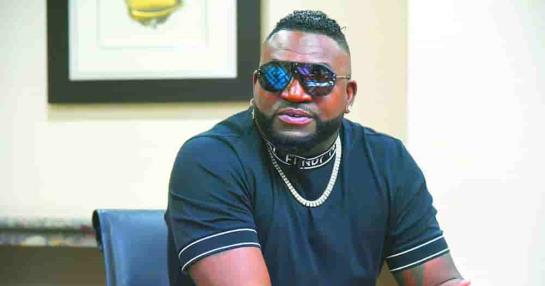 SANTO DOMINGO. David Ortiz He was a great player for two decades in the baseball Major League Baseball and for his achievements, he was elected to the Cooperstown Hall of Fame.

Ortiz knows very well the sacrifices that must be made and how hard one must work to achieve something in life.

At 46 years old, Ortiz has been an important figure in Dominican society, not only because of his sporting impact, but also because of what he has tried to contribute to society through his foundation and other actions.

And that love for the Dominican Republic leads him to worry about the situation that, he sees, Dominican youth are going through.

“(I am concerned) about youth. It is that youth is the photocopy of what we are going to be in the next 20 years. As a country we have advanced, thanks to the generation of people like us, who prepared themselves and had a future vision. But I start to see what the youth is doing today and I don’t see the north. Everyone is in perreo, in rulay, I am the cool mommy and I am the guy who has it, “she said.

“Education is not only for the player who should be interested. That goes hand in hand with the human being itself. Education opens many doors for you and over time you realize it,” said Ortiz.

He regretted that today many people do not want to “make their center” but believe that success comes overnight.

“The youth of the Dominican Republic who come from the neighborhoods, education is not the north. The vast majority of people want to be rich, famous, but people do not believe in processes and that is why so many young people are dying, they are in trouble, so many families are missing, but everything has to have a process. Nothing in life comes without processes. The processes are what make you take care of what you achieve, ”she indicated.

More than two weeks have passed since Ortiz received the news on January 25 that he will be part of the exclusive circle that reaches the Hall of Fame of the Baseball (1.5% of former players), but he still hasn’t finished processing the avalanche of emotions that this recognition has generated in him.

Ortiz thinks it will take months. He confesses that being chosen in his first opportunity has surprised him by the value that it has, while he feels that he has lifted a weight and talks at length about how he has dealt with the suspicion of the alleged positive test for steroids in 2003.

“For me to enter Cooperstown in the first, in the second, in the third, in whatever, I understood that it was the same, I understood, but later when I saw the juidero and the people talking I realized the importance that it was going into the first round,” Ortiz said.

“I like things to happen first before I go to lay an egg talking and saying. But it is that my numbers were too accelerated. I put up good numbers and that’s what Cooperstown demands, ”explains Big Papi during his visit to DL.

Some numbers that as you see the baseball evolve, with the money that is granted today, he doubts that they will be requirements in the future, since it foresees the players retiring earlier and lowering the bar.

Ortiz is the third Dominican of the generation that broke into the Major Leagues in the 1990s to reach the temple of the immortals and has his opinion on why the number is not higher with Quisqueyans who passed before.

“I understand that we had a different discipline. If you go to the case of Pedro Guerrero according to what is said and it was seen that he was a tough hitter, one of the best Dominican hitters, then you see his numbers and they do not compare to ours,” Ortiz said. “What do you say? Let’s go to Pedro’s lifestyle when he played how he was. Go Vladi-style, go David-style. The game was over and I went home to go to bed, I can’t have bad nights, maybe on a day off I could, but I maintained discipline, which is the only thing that teaches you what your production is going to be like through the years.”

Ortiz got the regularity in the Big Show at the age of 24 in Minnesota, but he understands that his career as an immortal began to be built from the age of 32 with the Boston Red Sox, already with good money earned, but wishing to prolong his career until he was 40.

The rivalry with the Yankees

Since 2004, when he led the attack against the New York Yankees in the American League Championship Series, David Ortiz he became one of the best producers against the Bronx Mulos, one of the most intense rivalries in the game. “I once played a game with a 40 (Celsius) fever and went 4-for-5 against the Yankees,” said Ortiz, who hit .303 with 53 home runs and 171 RBIs in 243 career games against the Yankees. He recounted a game that manager Terry Francona had decided not to play because he was 0-for-8 against Mike Mussina. “I told him there was no way I could sit down, he hurt my self-esteem and I braced myself and prepared for that game and the result was that I hit a home run. Today, sabermetrics might not have let me play and sabermetrics is good for the game, but it doesn’t measure the heart”.

Dionisio Soldevila Brea has a law degree and sports chronicler since 1998. He has been Deputy Editor-in-Chief and Sports Editor of Diario Libre since January 2021.

David Ortiz: “I am concerned about the youth of the Dominican Republic and what is coming in the future”