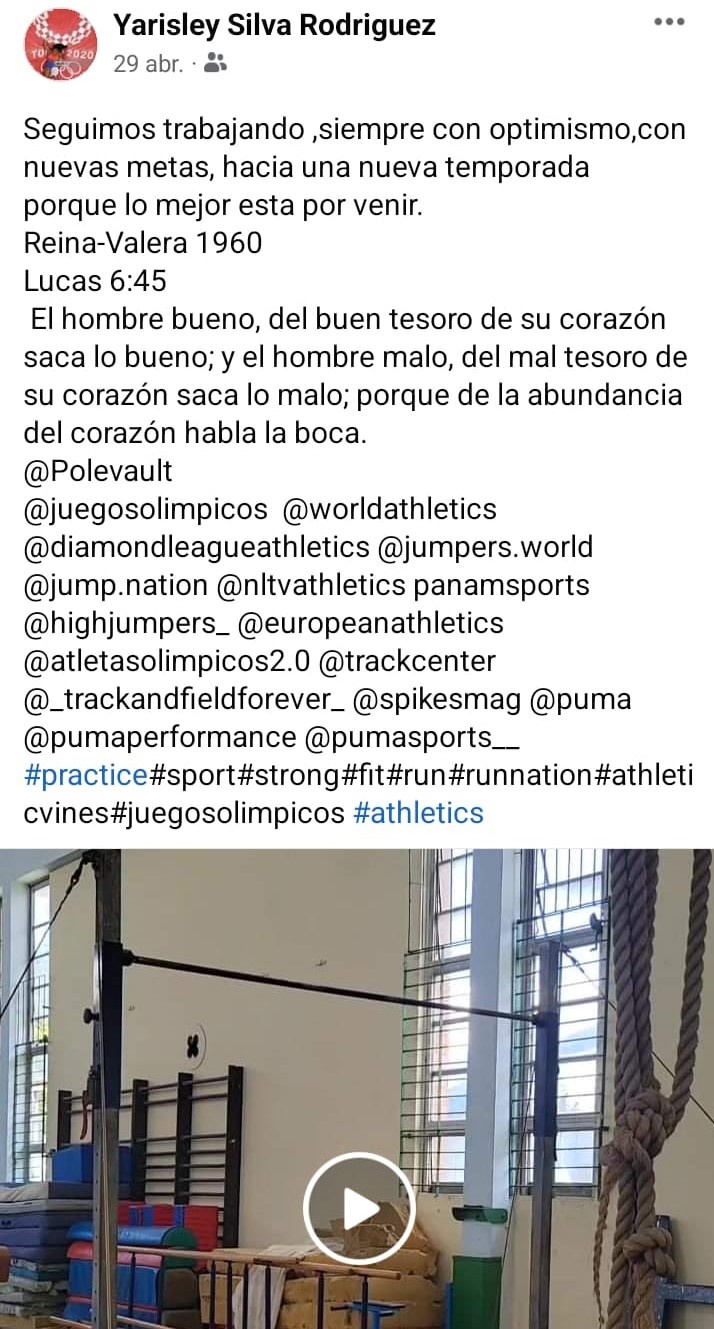 At the beginning of last April, the news broke that Yarisley Silva, the best Cuban pole vaulter in history, had made the decision to withdraw from the national athletics team together with her coach.. Of course, that generated a huge stir despite the fact that “Yarita” is not in its moment of glory today.

It may interest you: Cuban Olympic and world multi-medallist arrived in the United States and announced a new project

«They should never have said goodbye in that way to the sport that contributed so much for years. The world champion and Olympic silver in pole vault Yarisley Silva Rodriguez and his trainer Alexander Navas Páez request withdrawal from the national athletics team. Unfortunate without a doubt. Although we would never have wanted their goodbye to be this way, they have the applause and eternal recognition of Cubans and lovers of athletics,” wrote Raúl Rodríguez, one of the best sports journalists in the official union of the Island.

Although she did not give statements to any media, several speculated that one of its causes could be what happened around the Indoor World Cup in Belgrade. After situations around her visa that were finally resolved, Silva decided not to participate because her poles did not arrive from Spain and he considered that the ones granted by the venue would not generate enough confidence for a good result. The latter was publicly explained by the National Commissioner Yipsy Moreno.

Many, not only Raúl, considered that it was a sad goodbye to the sport for the 34-year-old athlete, something that definitely changed shortly after.

It may interest you: From Havana airport Cuban launcher sent EMOTIONAL farewell MESSAGE

After seeing some videos of someone who amazed Cuba and the world by becoming a world athletics star in an extremely complex specialty, that caught my attention. Perhaps it was the beginning of a process of losing training, future participation in professional clubs or the return to the Cuban team despite what happened very recently.

That’s why I decided to contact someone I greatly admire for his results and sports combativeness, but also for a Christian faith that has contributed a lot to his personal growth.

In a diaphanous conversation, Silva told me that both she and her coach were once again training in the main athletics stadium on the Island, as part of the national team and highly motivated for the immediate future.

The 2015 Beijing world champion, London 2012 Olympic runner-up and three-time Pan American championpreferred to reserve what happened a little over a month ago, because now what matters is to focus on daily work for what may come later.

It may interest you: Hall of Fame and MLB team arrange trip from Cuba for star ex-pitcher

Although many believe that Yarisley’s past results are part of a past that will not return to the level of the moment in which it is due to age and physical conditions, others believe that not only returning to an Olympic or world award podium is the only goal to meet. In addition to the fact that we are not talking about such an advanced age, but about someone with a will to respect.

There are multiple competitions throughout the season that can contribute sportingly and financially, then the Outdoor World Cup, the Pan American Games, the Central American Games and finally the Olympic Games in Paris in 2024 would be on the horizon. It is clear that there are very complex events for her in terms of to a first-class result, but there are other goals that are more within your reach.

It is true that there is a very true phrase that “a withdrawal on time”… and others will now question returning after his decision to leave very recently, but for most of his followers Yarisley deserves a very different goodbye from the one he did very recently. little generated so much controversy everywhere. Besides that it is in his right to try a better ending. Good luck in the hard endeavor and may her faith in God help her make this return worthwhile.

It may interest you: TOUGH BUT ADMIRABLE: Talented baseball player from Las Tunas showed why he CANNOT leave Cuba