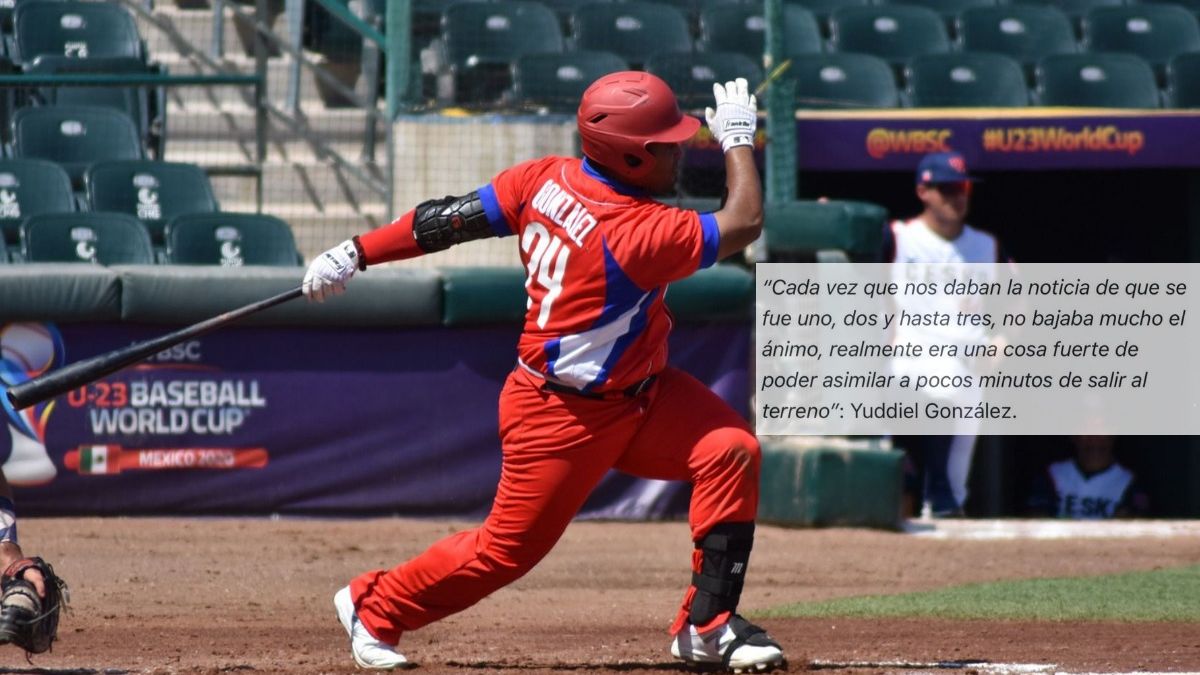 However, according to journalist Francys Romero, who was at the tournament venue and reported from the beginning the continuous leaks of baseball players, which ended up leaving only half of the players who left the Island in the squad, González’s story is missing essential elements.

“In the recently completed U23 World Cup there was a player who returned after 30 minutes, according to sources confirmed to me and Cuban Ball. His name is Yudiel González, 24 years old. González got into a car, but he repented and asked to be returned to the hotel“Romero wrote on Twitter.

According to the journalist specialized in baseball Cuban, that report was not published “ so as not to damage the athlete’s image“However, since Yudiel gonzalez avoided mentioning his attempted escape to Radio Rebelde, Romero offered all the details of what happened.

“In the history of emigration from baseball there are repeated experiences of ‘escape’ or ‘return’ regrets, but you cannot justify the pressure exerted, which could have existed, and not speak of your own intent. It is unknown if the player will be forgiven, it seems that yes, “he said.

“The report of the possible leak of Yudiel gonzalez on September 29 it was just minutes from being published (…) Hopefully and the official media clarify and give a version of what happened, “he concluded.

Yudiel gonzalez, who decided the games of the Cuban squad against Taiwan and Panama, was one of those interviewed by Radio Rebelde in a report where the dropouts of players were described as part of a “soft coup”, a term that the regime uses both to describe the 11J demonstrations such as protests by civil groups such as the San Isidro Movement and 27N.

According to Luis Daniel del Risco, Treasurer of the official Cuban Baseball Federation, an entity that hires Cuban players in foreign leagues and charges a percent of the salaries they earn there, something impossible with those who make their way on their own like the 12 fugitives in Mexico, what happened in the U23 World Cup seeks to “demoralize the Cuban baseball “.

According to the official, “they did not shout things at us, nor did they raise signs, but they attacked us mainly through social networks. (…) What they want is for this achievement of the Revolution to disappear, on that we have to concentrate to have best results”.

According to the Radio Rebelde report, the athletes and even more the players will be “the only ones who have to give up being Cubans to reach the Major Leagues.”

The note avoided mentioning that It was Fidel Castro who imposed on Cuba the idea that playing in the Major Leagues was a betrayal of the country and that since then those who decide to pursue a career abroad without the approval of the authorities are subjected to the punishment of at least eight years without re-entering Cuba.

The U23 World Championship Baseball it became the event in which more Cuban players have left national teams. The highest number of dropouts during a tournament had occurred in 1996, when five players from the Industriales team fled the squad at the Champions Clubs tournament, also in Mexico.