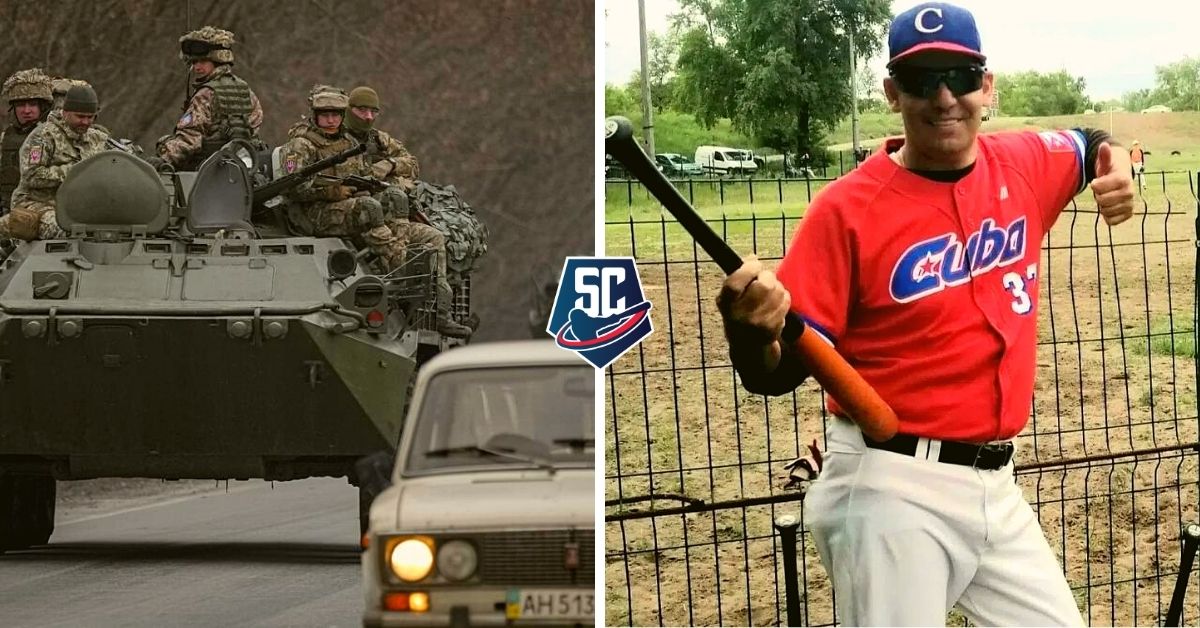 The recent Russian invasion of Ukraine has generated all kinds of concerns worldwide and the impact it has generated in the latter country is already considerable.

Hundreds of thousands of people have moved to nearby nations or are holed up in fairly safe underground locations at the moment.

Among those who make up the second group mentioned is a Cuban baseball player who, together with his family, is trying to save his life in the midst of the armed conflict that continues to intensify in the region.

It may interest you: Gurriel SPOKE about Free Agency and the MLB-MLBPA debate: “I need there to be a ball this year”

This is Raidel Arbelay Becerra from Villa Clara, the only Cuban with a presence in recent times within the discreet Ukrainian league, and who in addition to baseball has also had a special bond with religion as pastor of a Protestant church in the main city of Ukraine .

The most recent information about what is happening around Raidel and his loved ones was obtained from two of his friends, Alexander Roque and Janoi López Quintana, who have maintained communication with the native of the Villa Clara town of San Juan de los Yeras.

“I spoke to him yesterday and he was in a safe shelter with his family. Today we still haven’t communicated but I try to be aware of everything. I’ll call him later to make sure every day and to know his situation. God bless him, his family, and all those who are in the middle of that situation right now », Alexander Roque told me through facebook.

Born on November 27, 1970 in the same land of renowned baseball figures such as former pitcher Rolando Arrojo and referee Luis César Valdés, he has emigrated to the gigantic European country for many years. There he emigrated at the beginning of the current century and immediately became involved with baseball in the Ukrainian capital.

The ATMA club was the one Raidel played with last season. This is one of the five that make up the Ukrainian circuit according to information from the Cubalite site. With them he attended the Confederations Cup that was held in the capital of this country.

The publication itself indicates that the Cuban was as a starter all the time, playing third and second base. He finished with an average of 273 (three hits, one double, one triple and two RBIs).

In the most recent domestic league he played seven matches, which is the fewest number that are held on the Ukrainian circuit. He pitched in a pair of games with three strikeouts in three innings of work and two runs allowed.

But years ago he had a better performance, as happened in 2018 when he compiled 365 with 22 hits (second best number of his team). The following year he was the second best in batting (.369) and nobody was better than him in total hits (24), a task that he surpassed in 2020 when he averaged 414 with a personal record in hits (29).

Raidel came to wear the Ukraine uniform in international events, although he did not do so after his participation in the 2010 European Championship (8-0).

Returning to the issue of the situation in Ukraine, everything remains in total alarm for that country and the entire geographical environment. Not a few are even more concerned and consider that the lack of a peace agreement could generate unimaginable consequences.

At the moment Raidel and his family remain in that shelter and their fate is very uncertain, although his status as a Cuban citizen could leave him a way out in case other doors are closed, and as long as all this conflict does not transcend too much the current borders.