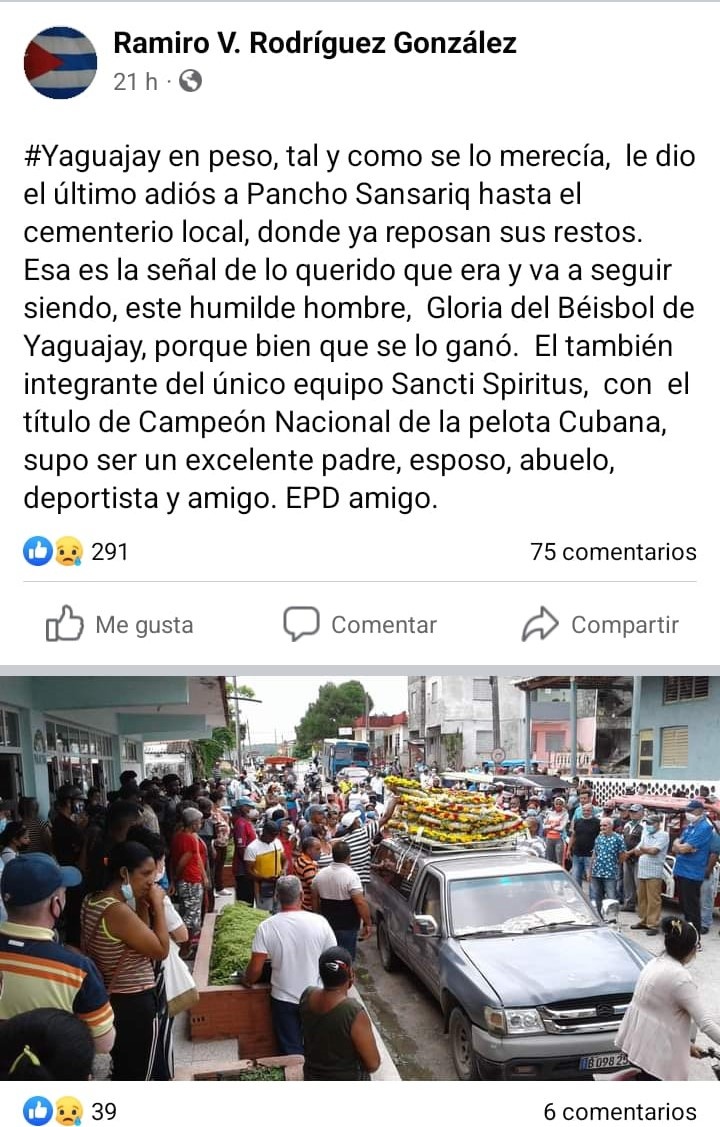 When a baseball figure dies and receives the best media and popular treatment, it is something that personally gives me the consolation that at least there was something important to highlight in the midst of the tragedy that a moment like this always represents.

What happened with former Sancti Spiritus pitcher Francisco Pascual Sansariq is what should always happen with each of the good ballplayers who say goodbye. I am not only talking about the multiple promotion of the news with the accompaniment of his merits (thanks largely to the tweet of the Cuban Baseball Federation), but also the direct support of the people during the funeral process.

What was experienced in the streets of Yaguajay was something impressive. The last physical goodbye to one of the protagonists of the only Sancti Spíritus title in the National Series was at the height of what he offered to his province during the initial stage of this team in the Cuban classics.

“Pancho” left a perfect record of 6-0 in that 1978-79 contest in which those led by Cándido Andrade achieved what represents their only victory to date in the Cuban championships at the highest level.

In this way, he joins Andrade as the most significant deceased of that triumph in Sancti Spiritus in which stars such as Antonio Muñoz, Lourdes Gurriel and Roberto Ramos had enormous prominence. Sansariq died at dawn this Monday victim of a cerebral infarction at the age of 64.

It may interest you: Tweet of the Cuban Baseball Federation CAUSED IMPACT in the Cuban and foreign press

Less than six months ago, Yaguajay fired another player of some renown, but above all he has excelled in recent years as a coach. This is the case of former receiver Yoanys Delgado, son of the stellar mask of the eighties and young José Raúl Delgado, a product of COVID-19. In homage to him, the children’s stadium of the municipality was baptized with his name.

Hopefully the next important death in Cuban baseball will be delayed. But it is clear that sooner or later it will come and when that happens, the example of what happened with Sansariq must be imitated. Both the Cuban Federation and the press and fans of the town or city of residence.

It is the least that can be done for those who contributed so much to Cuban baseball at its different levels, which is the same as saying “honor to whom honor is due.”

AS IT SHOULD BE: Cubans FILLED streets at funeral of outstanding national baseball champion