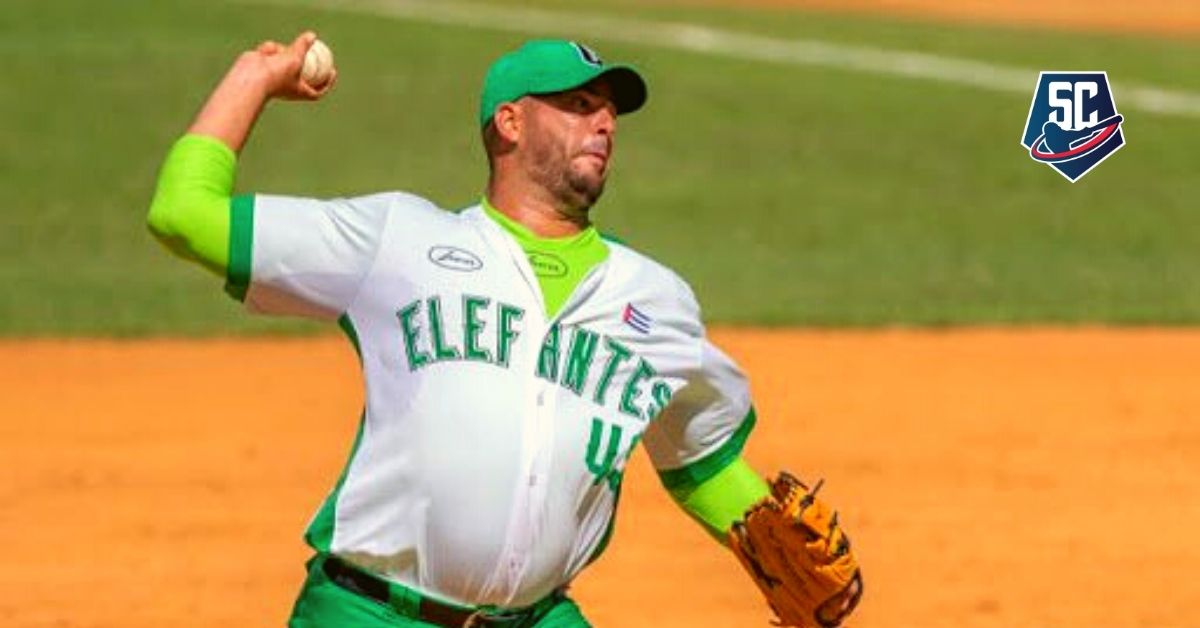 Yasmany Insua is a “little guajirito” from Rodas, Cienfuegos, who surely has no greater pretensions than to get people to speak to him face to face looking into his eyes and give him the place he deserves, not because he comes from a royal family or tradition, but because of the delivery, sacrifice and contribution given to the pachyderms during 14 seasons in the National Series.

The vast majority of his 244 pitches have been in the starting role, and already in the 2019-2020 season his results were extraordinary and must have been the key to many things. On the other hand, for Yasmany nothing changed.

In Series 59 “the great one from Rhodes” pitched in 17 games, 15 as a starter and sealed 10 wins with four losses. When we talk about delivery and safe commitment we look at his two saved games, out of role and assigned rotation. Likewise, we also look at the traces of injuries from throwing more than the ball at home plate, the arm. The hours of rest, physiotherapy, pain, are never so visible as when one day things do not go well from the box.

It may interest you: Kenley Jansen: Renew or Replace? There is the question

Yasmany started with his teammates on the road to Series 61. But men also have problems and they hope that the support will always come from where you have spent your life, your skin and your arm. And on many sad occasions it is not like that.

Everything explodes for the fans when suddenly the star pitcher of the team, the number one in the starting rotation, the man who had to lead some Elephants that have suffered very important casualties in recent months (Cesar Prieto, Daniel Pérez Pérez, Luis Enrique González just to mention the most important ones) in his eagerness to “return” to the Cuban baseball postseason.

According to a team member who prefers anonymity for obvious reasons, the controversy broke out in a meeting just before the match between Cienfuegos and Matanzas on “September 5” on December 17. The preparatory top for the National Series 61 had as a starting pitcher by those from La Perla del Sur to the Rodense, which had been requesting the Provincial Commission for support to solve “some personal problem”, according to the words of Alaín Alvares, team manager. in the Serien Nacional, which some consider to be an easy solution for that instance and which functioned as firewood to warm up relations.

Yasmany lives in Rodas and travels continuously to Cienfuegos to train and enlist. Some time ago he asked for help on this subject to be able to get closer to where he has his daily “work” and to be able to dedicate himself in a better way to preparation and competition without the need for the trip that tires and wastes precious time. Recently, homes were handed over again in the province and her case is kept on file. Apparently that is where the water enters the coconut.

To this, and as a drop that spills the glass, was added the reproach of members of the team’s directive about his “lack of delivery” by not covering the initial in a hit for the first time during the aforementioned game, minutes before he was stolen. of the party by being connected with ease.

According to Alaín Álvarez, “Insua dropped out at his own request, there are no disciplinary issues or discrepancies with the board, just a personal problem that has had no solution that made him decide to leave the sport.” This contrasts with the information that comes to us from deep within the Cienfuegos Team and witnesses of what happened that put the rather common lack of attention to the situations presented by the players at the center of the problems, and of which the province of Cienfuegos , unfortunately flaunts.

According to the team member with whom we were able to talk, Yasmany left training but did not close the door when he returned.

His intention is not at all to leave baseball or seek opportunities in other lands. His intention, according to what they tell us, is to return to the box on “September 5” and listen to the elephant’s bar with each strikeout he achieves, but as an old Roman proverb says, “when ceasing what belongs to cesar” and Yasmany, You need to fix your situation and focus on what you can do, play baseball.