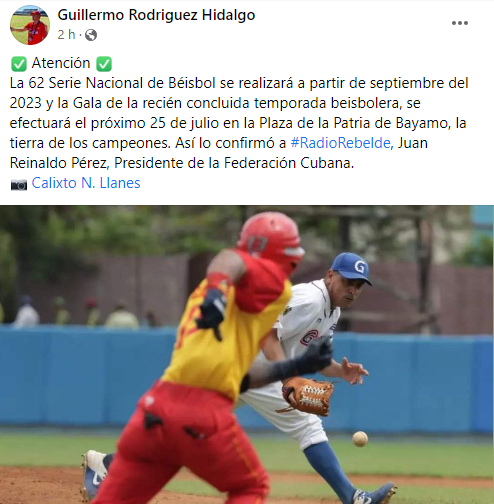 After the historic comeback of the Alazanes de Granma against the Cocodrilos de Matanzas, to be crowned champions of the 61st edition of the National Baseball Series, for the second consecutive year and after the official information on the development of the I Elite League starting next October, on the afternoon of this Wednesday, June 30, the tentative date on which the 62 Series of Cuban baseball will start was revealed.

It may interest you: Cuba ANNOUNCED dates, rosters and teams of the I Elite Baseball League

As reported on his social networks by Radio Rebelde journalist Guillermo Rodríguez, the main Cuban sporting event, in its 62nd edition, will begin in September 2023, as confirmed to the aforementioned media outlet, Juan Reinaldo Pérez, President of the Cuban Baseball Federation and National Commissioner of the discipline.

In addition, Rodríguez reported that «The Gala of the recently concluded baseball season will be held on July 25 at the Plaza de la Patria in Bayamo, the land of champions».

It may interest you: THE MOVE OF THE YEAR: Cuban arbitration chief recognized WRONG DECISION

As can be seen, more than a full year will pass without the National Series being played and a second edition of the elite tournament is not in sight in 2023, based on the announced date.

«The Series began in January for all the time we had been without baseball due to the pandemic. For me, starting in September is the ideal date, because our main event would not be so affected by the departure of players from contracts. It will also be a year full of international events, including the Caribbean Series, the Classic, the Central American and Pan American Games”, The journalist himself commented in his publication.

It may interest you: Lisbán Correa wants to make uniforms for Cuban baseball

Once again, the Cuban sports calendar, and especially the national series, will undergo variations and changes. Let’s hope that, despite the wait, these are final and, furthermore, the elite competition is not a failure similar to the Super Leagues, which left neither sorrow nor glory.